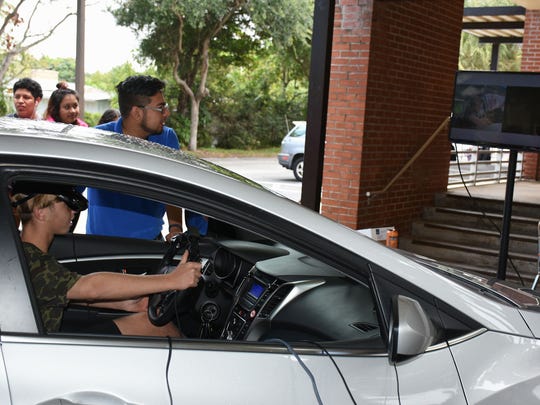 “Man, I’m never getting in a car with you,” one of J.J. Phillips’ friends said after watching a video monitor as Phillips ran through the simulator. “You wrecked in 15 seconds. You dead.”

In Phillips’ defense, he had an adult next to him as he attempted to maneuver the Hyundai through a computerized course, egging him on to do what everyone knows they shouldn’t do, but so many teens, and drivers of all ages, do anyway – monkey with his cell phone.

A student signs a “no texting” pledge after completing the course. (Photo: Lance Shearer/Correspondent)

Wearing virtual reality glasses, a student follows instructions to use his phone while “driving” the stationary vehicle. (Photo: Lance Shearer/Correspondent)

Wearing virtual reality glasses, a student follows instructions to use his phone while “driving” the stationary vehicle. Naples High School students experienced a simulation to demonstrate the danger of texting while driving on Friday, May 5, in a program sponsored by State Farm Insurance. (Photo: Lance Shearer/Correspondent)

“What time is it?” simulator manager Angela Koetsier asked one driver, after he had been hooked up to virtual reality goggles and was theoretically driving down the road, and through a construction work zone. “Look on your phone and tell me.”

She instructed another to “text your mom, and tell her you love her,” a macabre reminder of the last messages that some young drivers send before they get into an accident. Moments later, the other kids standing outside the car saw the resulting crash, and the windshield shatter as the driver ploughed into a roadside obstacle.ADVERTISING

If you’re going to crash your car while texting on your cell phone, this was the way to do it. On May 5, students at Naples High School got the opportunity to learn firsthand the perils of distracted driving, without the risk of damaging their cars, or killing themselves or someone else.

As part of a tour sponsored by State Farm Insurance and the PEERS Foundation, a safe-driving coalition, students in teacher Jim Barr’s driver education classes were instructed to get behind the wheel, and – just this once – text and drive.

Sitting next to the school’s auditorium was a Hyundai Elantra perched on a pedestal, with wires connected to a pair of laptop computers, running an AWARE-TXT Simulator, electronics that mimic driving down the road. One by one, the students donned goggles and “drove,” until the cellphone placed in the car beeped with a text, which they then answered while continuing to drive.

The rest of the class, standing outside the car, watched their progress on a flat-screen monitor. Time after time, they grimaced or giggled as the virtual car ran off the road, took out a digital pedestrian or crossed the median and met an oncoming vehicle head-on. Along with construction equipment, other drivers cutting the student off and pedestrians, hazards included a moose who showed up in the road, surprising even the instructors.

Moose may be rare on Florida roads, but in the north woods of states such as Maine and Minnesota, they can be lethal, tall enough to have their bodies smash through the windshield and impact driver and passengers. Florida has plenty of cows, bears, panthers and even alligators, any of which can cause a collision.

The goggles and the setup made driving a little tougher than getting into your own wheels, but the simulator made the point that an emergency situation can arise at any moment, and anything that takes a driver’s eyes, hands and attention away from the road can be deadly.

“These kids have their phones on 24/7. They’re used to having that device in their hand at all times,” said Scott Seymour, safety program at the PEERS Foundation in Grand Rapids, Michigan. And it’s not just kids, he added.

“Checking email, punching in a destination on the GPS – same thing. No matter how old you are, your only job behind the wheel is driving.” Statistics show, he said, that texting while driving is substantially more dangerous even than driving drunk.

Partnering with State Farm, PEERS has taken their simulators and their message on distracted driving to more than 2,700 schools nationwide, said Seymour. Having visited Montana, North Dakota and other northern states, the team at Naples High will be continuing on to schools in Miami, to Texas for school visits in Dallas and back to Pensacola on their current tour. They will travel in that same Hyundai, with their video screens and computer equipment in the back – and hopefully, not be texting while they drive.