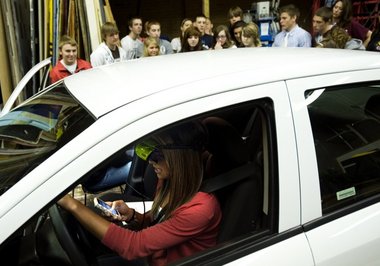 Sliding into the driver’s seat of a white Chevrolet Cobalt, 17-year-old Kyle Neu put one hand on the steering wheel and hit the gas.

His other hand was on a cell phone as he attempted to write a text message.

It took only seconds for him to broadside a virtual pick-up in the driving simulation that aims to show teens the dangers of texting while behind the wheel.

“It’s difficult,” said Kyle, a junior at Western High School. “You shouldn’t be doing anything else when you’re driving.”

In 2009, 5,474 people were killed on roadways nationwide in accidents involving distracted driving, according to the most recent statistics available through U.S. Department of Transportation’s distracted driving website. In 995 of those incidences, a cell phone was the source of distraction.

A statewide ban on texting while driving took effect in July. It makes sending, reading or typing a text message while operating a moving vehicle a civil infraction. Violators pay a $100 fine for the first offense and $200 for additional offenses.

Students need to learn that texting and driving can be deadly, said Robert Tower, of the Grand-Rapids based PEER Awareness Company, which brings the driving simulators to schools.

“It just takes a mere second,” Tower said. “It can change your life.”

PEER brought the simulator to Western High School for two days and school leaders hoped 400 students would be able to go through the program during that period.

Classes attended the approximately hour-long program throughout the day and started by watching a video about the dangers and repercussions of texting while driving. Afterward, students took turns behind the wheel of a modified full-size car that was connected to a computer program designed to simulate driving. Students wore virtual reality goggles that showed the image of the road and the car’s steering wheel, brake and gas pedals were wired to react to the driver’s actions.

“It was difficult to drive,” said Jennifer Moll, 16, who plans to get her driver’s license in June.

Teachers in driver’s training stressed that it is dangerous to text and drive, she said.

“It’s the same as drinking and driving,” said Jennifer, a junior at Western.

Tower, who has brought the simulator to more than 2,000 schools in the past five years, said teen texting and driving is not a problem isolated to one area.

“You hear about it so much in different states,” he said. “It’s epidemic.”