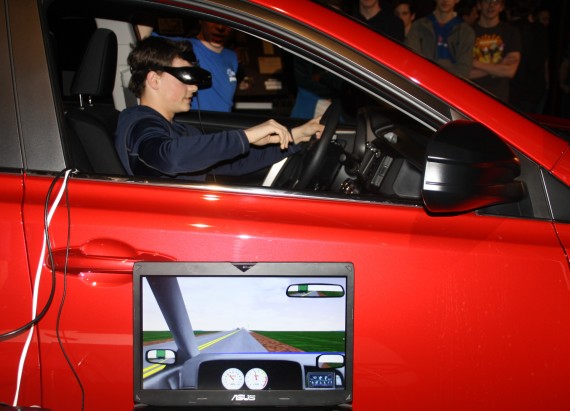 For Tara Wasik, of Szott Automotive Group, distracted driving is personal.
“My son’s best friend was killed by a driver six months ago – it’s so deadly,” said Wasik. “We’re just trying to get the word out there, try and get these kids to stop texting and driving.”
Szott provided a vehicle for a virtual reality driving simulator at Clarkston High School, March 23.
The simulator was created by The PEERS Foundation, a national non-profit health and wellness company. PEERS Foundation Director of Corporate Education Partnerships Kenny Lyles said they put on educational programs for young adults and students.
“We do everything from STEM education to drunk driving prevention, nutrition education and, of course, the distracted driving program,” Lyles said.
The simulator was attached to a real vehicle to make the experience more tangible for students.
“The students are actually going to be getting into the car,” Lyles said. “The simulator attaches to all the bells and whistles of the vehicle, so, the steering wheel, the gas pedal, the brake pedal will actually work as they manipulate their way through the virtual world using the virtual googles.”
The simulation allowed students to pull their phones out and text while also trying to drive. Lyles said sometimes they put a couple students in the car, because incidents go up when multiple teenagers are in the vehicle.
“It simulates a real driving situation and shows them what can happen if they take their eyes off the road for just a second,” Wasik said.
Lyles said the PEERS Foundation started the program due to the dramatic statistics involving teen accidents resulting from distracted driving.
“We do about 3,000 events around the country and right now this simulator’s on tour in the Midwest,” Lyles said. “We’ve found out there’s been a great deal of support from auto dealerships and auto manufacturers with this initiative. They want their drivers and their cars to be safe.”
Technology used by the foundation helps bring awareness to the problem in a way that makes sense for teenage drivers.
“Kids like the technology and if you can bring something to them that they like and also bring awareness to a huge problem that kills kids, it makes a real good impact,” Lyles said.
Students lined up in the high school’s performing arts center to take turns experiencing the simulator. Driving an actual car during the virtual reality scenario imprints the students with muscle memory, Lyles said. When they get into their own cars, it’s exactly like the simulator.
“It’s a real life impactful program, we don’t do any lecturing, we let the machine do all the work and all the talking for us – that’s one good thing about it,” Lyles said. “When the kids get out, they will literally understand multitasking behind the wheel is dangerous.”
Ally Bank sponsored the event along with Szott Automotive Group.