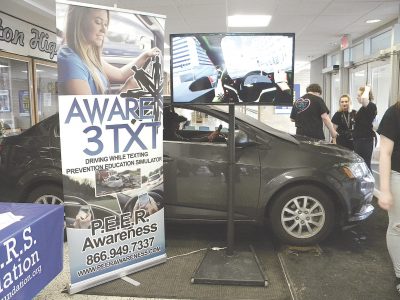 BURTON — The PEERS (Professionals Encouraging Educational Reform Statewide) Foundation has been visiting high schools with a new tour designed to educate students on the dangers of distracted driving. Students at Atherton Jr./Sr. High experienced a driving simulator as part of this initiative this month.

“We teach them how sending a text message or picking up a water bottle can cost their lives, and it’s not worth risking their lives or the lives of others,” said Cindy Choang, a technician for the PEERS foundation.

PEERS staff use a brand-new technology not available to the public for the simulator.

The kids get in the simulator and it’s designed to be similar to driving. Although PEERS has been operational for years, the show with the new technology started in February.

The students are asked to text and drive, take a selfie and do anything drivers do.

Choang said this encourages conversations with parents at home about distracted driving, and helps parents understand the risks.

“A lot of kids tell us they see their parents texting and driving and that’s why they do it,” Choang said. “This way, the parents can be more conscious of their actions while driving.”

At the end of the experience, students can sign a pledge saying: ‘I pledge to respect my life and the lives of others by avoiding distractions that take my eyes off the road.’ About 70 Atherton students signed the pledge.

Michelle Turner is the advisor for Students Leading Students (SLS), the group which hosted the event. Turner said it was important to bring awareness about distracted driving to the school because distracted driving is the number one killer of teenagers.

“A lot of our students think they’re invincible and nothing can happen to them,” Turner said.

Noah Kennedy, 17, who is in 12th grade, signed the pledge and said the simulator reinforced what he learned in driver’s education and what his parents taught him.

“My parents and the driver’s ed teacher both told me not to text and drive,” Kennedy said. “My parents said don’t make phone calls in the car unless it’s an emergency. I’m not the only one on the road. You want to protect everyone else out there as well.”

Haley Ashmun said the simulator was weird, but similar to driving.

“I learned it’s a lot harder to concentrate when you text and drive,” she said. “I signed the pledge to promise I would stick with my decision not to text and drive.”