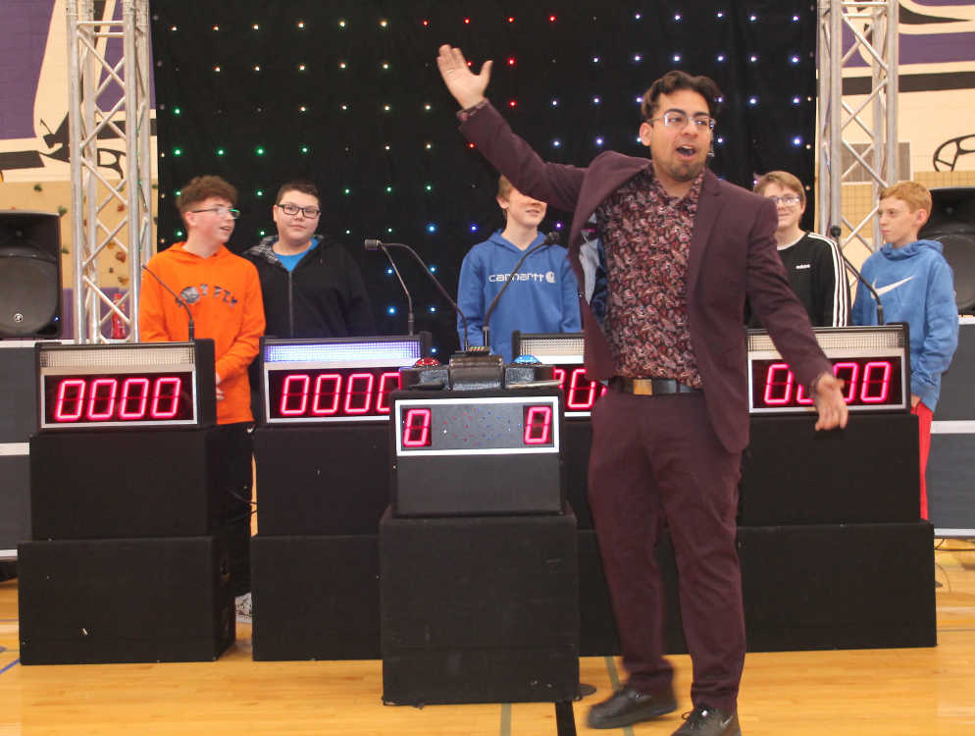 Orlo Azul, with the PEERS Foundation, served as the game show host as part of an informative program on vaping on nicotine dangers presented to the Spencer Middle School students Thursday afternoon. Students answered questions and were afforded opportunities to play other games for cash and candy.

Taking an original approach to educating middle school students to the dangers associated with vaping, facts were delivered to the sixth through eighth grade classes in a game show. Rather than a gym full of quiet, reluctant youth — game show host Orlo Azul had students screaming, jumping up and down and cheering for one another as he introduced the information through interactive trivia questions — offering up cash and prizes to the winners.

Orlo Azul — whose real name is Orlando Estrada — works with the PEERS Foundation and has been offering these unique, fact-based, presentations across the country for eight-plus years.

“We do a trivia game show and we do various themes,” Estrada said. “Today’s theme is ‘Vaping and Nicotine Awareness’ and we give out prize money and cash. … We are always teaching about these topics, but there’s a better way to approach it versus ‘this is right, this is wrong.’ Why can’t we have fun and explore the details.”

Such is the approach as hand-held entry pads were distributed to teams of two throughout the gym. Winners were selected from several rounds of multiple choice and true-false questions regarding vaping facts, stats and general information. Winners were allowed to participate in additional games for cash and candy prizes. Estrada would hand out $100 in cash all totaled in the one hour show to some very happy winners, along with an assortment of candy to those who finished runner-up.

“It’s engaging,” Estrada said. “It’s all about participation. Everybody has a chance to participate at some point.”

“Daaron Hansen, our SRO, brought it to us to provide an opportunity for our kids to learn some information about vaping so they might be able to make smart choices about vaping,” she said. “Presenting it in a gamified method is a great way to engage kids and help them learn.”

“The purpose is to raise awareness of the vaping epidemic going on,” said Hansen, who also leads the DARE program. “It’s a huge problem.

He continued, “With this vaping they’re actually targeting kids by making it in those flavors — the watermelon, cherry. That’s how they’re drawing all those kids in. It’s not very well regulated. The deaths are starting to show up and the lung and health related issues are really starting to show up.”

Delaney said the school plans to follow up with students Friday.

“We will do some talking, read a couple of articles and get some feedback from the kids. The kids were very engaged and walked away with some good information they didn’t have before.”

Founded in 2007, the PEERS Foundation, based in Grand Rapids, Michigan, is a nonprofit organization that seeks to empower young people to build healthy and successful lives through innovative and interactive learning programs. Michael and Scott Seymore formed the PEERS Foundation to help bring educational programs to young people throughout the United States. With years of experience in event design and construction, booking, management and execution, they have spearheaded the success of the PEERS Foundation.