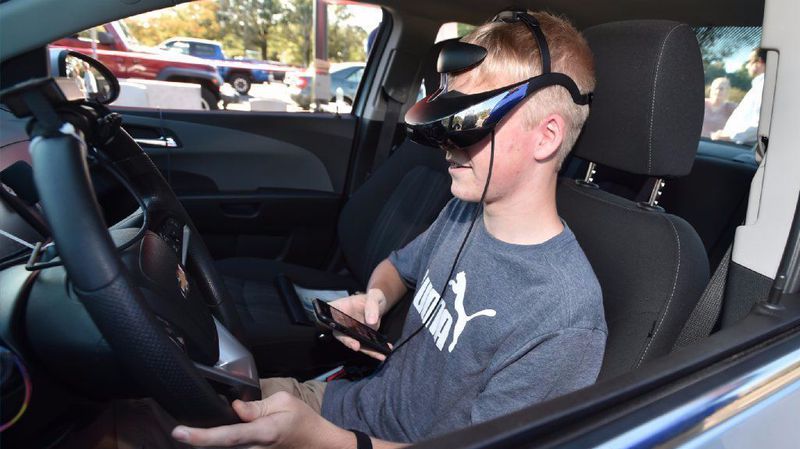 Your cellphone buzzes on your lap as you drive down Main Street. There are no vehicles in front of you, and the light at the next intersection is green, so you take one hand off the steering wheel, pick up the phone and glance at the screen. It’s a text from a colleague — you look a little closer.

Suddenly, a boy and his father cross into the middle of the street. You brake. You swerve. But it’s too late — your windshield shatters.

None of this was real except for Medendorp, who operated a distracted driving simulator Tuesday on Air Products’ corporate campus in Trexlertown. Medendorp works for the PEERS Foundation, a Michigan-based nonprofit that teaches mostly young people how to make healthy decisions using “interactive interventions.”

As part of its commitment to safety inside and out of the workplace, Air Products invited employees and their families to try the thoroughly nerve-wracking simulator.

According to the National Highway Traffic Safety Administration, distracted driving is anything that takes your eyes off the road, your hands off the steering wheel and your focus away from operating the vehicle. This includes using a cellphone, eating, fixing your hair and adjusting the air conditioner, among other things.

Distracted driving claimed nearly 3,500 lives in 2015 and contributed to nearly 400,000 crash-related injuries in 2015, according to the NHTSA. That’s about 10 percent of all fatal crashes and 15 percent of injury-causing crashes.

In 2015 alone, distracted-driving accidents contributed to the deaths of 550 pedestrians, cyclists and other nonoccupants, per the NHTSA.

Zach Roth wondered if his stepmother was wasting his time bringing him to Air Products on Tuesday to try the simulator. Then the 14-year-old Parkland High School freshman got behind the wheel of the silver sedan and slipped on the virtual reality headset.

He steered clear of an oncoming vehicle that crossed into his lane and another vehicle that pulled out in front of him. But he had phone in hand when “Timmy” and his dad jaywalked. It didn’t end well.

“You can’t help but feel scared when you hear the sound of the crash,” he said.

Medendorp and Jordan Wilson of PEERS bring the simulator to schools around the country, and they say the simulator has moved many teenagers to tears. Many realize for the first time how little a distraction it takes for something terrible to occur.

Sending or reading a text message takes your eyes off the road for about five seconds, long enough to cover a football field while driving at 55 mph, according to the NHTSA. While the total number of people hurt in distraction-related remained relatively flat from 2011 through 2015, cellphone use contributed to 43 percent more crash-related injuries in 2015 than 2011.

Bill Hoysan, an Air Products financial analyst, worries about how his daughter, Brianna, will handle some dangerous intersections near their home in North Whitehall Township when she starts driving next year. The 15-year-old Parkland sophomore kept her cool trying out the simulator but said afterward that she was surprised by the sheer number of potential hazards.

“It was definitely a good learning experience,” she said.

Lisa Roth, an Air Products customer service representative, said adults and teenagers can get complacent about the risks of using phones while driving, given how much we rely on the devices.